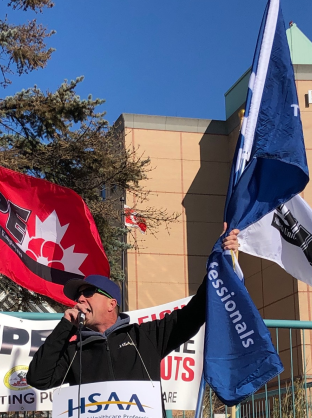 This week, Jason Kenney’s government tabled two of the most damaging pieces of legislation to health care and health-care workers that we have seen in decades.

He’s finally come clean with his ideological plan to destroy public health care and Albertans are counting on us, just like they’ve done time and time again, to defend public health care. We’ve been successful in fights like this in the past and, with your help, we can stand in his way once again.

The Kenney government has tabled Bill 30: Health Statutes Amendment Act, 2020 and Bill 32: Restoring Balance in Alberta’s Workplace Act. We have been expecting these attacks.

Bill 30 speeds health care towards American-styled privatization during a pandemic. It would see public dollars go to profits rather than patient care. The flow of public dollars out of our province to national and multinational health corporations would come at a time when we can least afford it, and it would begin the decline of the public health-care system that Albertans have relied on for more than half a century.

Bill 32 is an attack on working Albertans and the unions that represent them and advocate on their behalf. It is clearly unconstitutional based on past Supreme Court rulings, but that will tie us up in legal battles for years. We will have those fights to be sure, but we need to act now, together, to push back at the local level.

This bill is full of simply incorrect innuendo. It suggests our finances are hidden to you. As any of you who went through our Special Report can see, our finances and audited financial statements are available to any member who wishes to review them and they have been annually for as long as I have been a member.

It then suggests that we spend a vast amount of our dues on political activities and other causes. This is simply incorrect.

I’ve said it before, but it bears repeating. Not one damn penny of our dues funds any political party, be it the NDP or any other. It never has and it never will. In fact, the last government made sure in its very first bill that it would be illegal to do so. HSAA does not support any particular party.

That said, our members have told us repeatedly (we poll on this regularly) that you want us to remain politically active on issues that matter to us. So, when a government does something that aligns with our values and positions, we will praise them for it. And when a party or a government promises attacks on us, and then follows through, you better believe we’re going to have something to say.

As for how much of our dues is spent on this? Well, we’d be hard pressed to buy a specialty coffee from Starbucks every pay period with the savings from not paying that portion.

And right there you can see the value of all of us working together. There is no way any single one of us could have the same clout or ability to get into the media on our own. But our membership of 27,000 trusted health-care professionals standing together is a force that makes Albertans notice what we have to say.

That’s what scares Jason Kenney and other right-wing politicians. Our message stands up for public health care. We stand up for regular, hard-working people rather than rich executives. Albertans see themselves more like us than they do like Kenney’s cohort. That interrupts their path to profits and that’s why they will do whatever they can to silence us.

So, I urge you to stand together with me and fight.

How can you do that? Here are a few ways to get started:

1. Talk to your co-workers, families and friends about the attacks on health care and health-care workers. Let them know what Jason Kenney and his government are planning.

2. Join in some of the actions that are sure to be planned in the coming months. Last summer’s rallies were an effective way of showing our displeasure with the way that Kenney’s government ripped open our contracts and interfered with our wage reopeners. We can do that again. The attack on our pensions that happened in 2014-15 and our public response showed how effective we can be when we raise a ruckus.

3. Check out our I ♥ Public Health Care campaign page on the Member Hub and sign a commitment card that talks about how our dues are spent.

4. Join us at one of our telephone town halls for HSAA members on either July 14 or 21 (or both) to get more information and ask your questions. By now, you should have received an email with all the details. We’ll call you! All members need to do to participate is pick up the phone when we call.

I hope you can join us for one – or both – of the town halls, but if you can’t then let me leave you with one thing. Your union will not be standing by as this undemocratic and unconstitutional attack is carried out against you. We will be fighting back, even if that fight needs to happen in the legislature, the courts or the streets.

If you were to say that if feels like we’ve been here before, you’d be right. I know it gets tiring, but I urge you to find the fire inside of you once more. We’re on the battle ground once again because we’ve been successful in the past and they think we don’t have it in us again to push back. But we have to. We fought this fight in the 90s and we won. Our parents and grandparents fought the fight in the 60s and 70s and they won. Because of them, we have the universal public health-care system that kept us healthier through this pandemic than any private system in the U.S. could.

And… it’s up to us to defend it and make it better.

Together, we can do this. Will you join me?